Back to Business Forum 2019 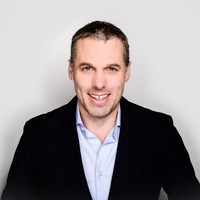 A leading authority on intelligent factories and the fourth industrial revolution, and a graduate of the Université du Québec à Trois-Rivières in mechanical engineering, Yannick Desmarais has been called upon throughout his career to manage projects aimed at improving the productivity of the companies in which he worked, and to institute production monitoring systems. Benefiting from the experience he gained not only in his work, but also through the many conferences and symposia in which he has participated around the world, Yannick Desmarais has, over time, become indispensable in matters relating to the performance and productivity of manufacturing companies, allowing his employers and clients to benefit from his extensive expertise in this field.

Following his graduation in 1997, he worked for major names in the manufacturing sector, including Kaba Ilco, a manufacturer of electronic locks, and then at Bombardier Aerospace in Ville Saint-Laurent. He later joined the team at Viau Foods, a major meat processor located in Laval. It was here that the idea for the revolutionary technology that would later become Worximity’s TileBoard system began to emerge. Indeed, it was in seeking a solution to monitor the efficiency of the production lines of his employer in real time that Yannick Desmarais found there was no such technology, easy to install and use, to accomplish such a task. Observing that there was an unfulfilled need at thousands of manufacturing companies, both in the agri-food sector and in other industries, Mr. Desmarais decided to start his own business.

Yannick Desmarais made the bold decision in 2011 to leave his job to devote himself full-time to this project that he was so passionate about, an adventure that had its share of risks and uncertainties.

Four years later, it is clear that he made the right decision. Today, Worximity has the wind in its sails, offers a unique solution in the world and received, at the end of 2015, a significant investment of $2 million from the Fonds de solidarité FTQ to support its growth. To date, the solution developed by Yannick Desmarais has been installed on more than 400 production lines in North America.

More than ever, thanks to the leadership, expertise and vision of Yannick Desmarais, Quebec is at the forefront of this fourth industrial revolution taking shape in the manufacturing world and which promises to radically change industrial processes, allowing companies from here and elsewhere to improve their performance. In addition, Yannick is recognized as an expert in smart factories and is regularly called upon to comment in the media or at conferences on the digitization of production lines.