Mr. Sciacchitano, will hold a conversation on “The Important Roles of ICAO and Aviation in Global Pandemic – Response and Recovery”. 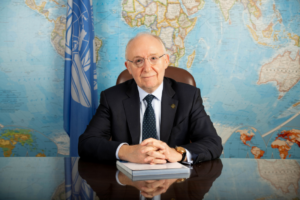 Mr. Salvatore Sciacchitano is the sixth President of the ICAO Council. He graduated in Telecommunications Engineering from the University of Catania and began his career in aviation in 1980, joining the Italian Airworthiness Authority (RAI) where he held positions of increasing responsibility, serving as the organization’s Regulation Director in 1992, then as Technical Director and, in 1996, as Director General.

With the merger of the aviation branch of the Ministry of Transport and RAI and the subsequent establishment of the Italian Civil Aviation Authority (ENAC), Mr. Sciacchitano assumed the position of Deputy Director General. He was also entrusted with multiple international mandates, chairing the Permanent Commission of EUROCONTROL, representing Italy in the Management Board of European Aviation Safety Agency (EASA), holding the Vice-Presidency of the EUROCONTROL Provisional Council and coordinating the Italian delegation during ICAO Assemblies.

As a result of his extensive experience in aviation international affairs, Mr. Sciacchitano was appointed Executive Secretary of the European Civil Aviation Conference (ECAC) in 2010.

ICAO is funded and directed by 193 national governments to support their diplomacy and cooperation in air transport as signatory states to the Chicago Convention (1944). Its core function is to maintain an administrative and expert bureaucracy (the ICAO Secretariat) supporting these diplomatic interactions, and to research new air transport policy and standardization innovations as directed and endorsed by governments through the ICAO Assembly, or by the ICAO Council which the assembly elects.

Industry and civil society groups, and other concerned regional and international organizations, also participate in the exploration and development of new standards at ICAO in their capacity as ‘Invited Organizations’. As new priorities are identified by these stakeholders, the ICAO secretariat convenes panels, task forces, conferences and seminars to explore their technical, political, socio-economic and other aspects. It then provides governments with the best results and advice possible as they collectively and diplomatically establish new international standards and recommended practices for civil aviation internationally.